A UFO could be anything; the term just means an unidentified flying object. It doesn’t have to be super natural or even out of the ordinary, just unidentified. you might not have enough information on the object  like you’ve taken a picture and see a blob… well that blob could be anything (an insect that was close to the lens or spot on the lens itself) it doesn’t even have to be a flying object to be termed UFO.  A UFO could also be deemed as such because no one bothered to look into it. There’s a bright object in the sky it could be a firework, a glow stick, a plane… who cares?

For purposes here I’m going to use the term UFO to mean alien space craft.

The earliest case I could find of a UFO in my extensive 30 second search of Wikipedia was in 1088 in the book “Dream Pool Essays” Testimony from eye witnesses stated “a flying object with opening doors would shine a blinding light from its interior, this would cast shadows from trees for 10 miles in radius,, and was able to take off at tremendous speeds” Now I think this tells us one thing.

If you want to fake evidence of a UFO one is over thinking it if one goes so far as to fake photographic evidence. As we see from “dream pool essays” one merely has to report they talked to someone who once saw one and it might be remembered for over 1,000 years.

Now I’m going to show you three famous UFO pictures, see if you can guess what they are.

The Battle of Los Angeles or “the great Los Angeles air raid” happened three months after the raid on Pearl Harbor, Feb. 25th 1942.

Originally some thought the attack was from Japan. In hind sight it wasn’t much of a battle as the UFO didn’t actually attack anything.

The Lubbock Lights were a triangular formation of lights as bright as stars but larder that flew over Lubbock, Texas several times in 1951. Three professors from Texas Tech. observed these lights when in the back yard of one of the professor’s homes.

After an article appeared in a local paper many other people reported seeing the strange lights.

In May to December of 1946 over 2,000 Ghost Rockets were sighted in Sweden by hundreds of witnesses, many in broad daylight. The peak sightings occurred Aug. 9 and 11.

Don’t go overboard in your designs. If your UFO looks man made, no one is going to buy it. And don’t show the aliens it’s just going to look cheesy.

Quality is not your friend

Remember you were just out for a walk when you happened to notice this thing in the sky. You DO NOT have time to zoom or focus! Keep your pictures low resolution and a bit blurry. 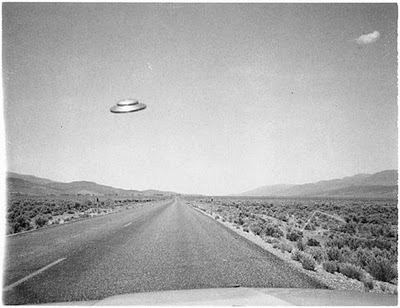 Especially if you are photo shopping. Make sure your resolution, picture quality and coloring is the same for the cropped image as it is for the background image, also make sure your lighting is coming from the same direction.

Use anything you can find. Garbage lids, rubber balls, Frisbees, whatever works. Hold your UFO with a string and a stick, or just throw it up in the air.

You are going to be relying on forced perspective so don’t be afraid to use it to its fullest.

Make your UFO as big or as small as suits your purpose.

Now go and make your own UFO pic.