When a person becomes a skeptic that doesn’t necessarily make them suspicious or doubtful by nature, but it does train the bullshit detector to be more sensitive.

Recently someone attempted, unsuccessfully, to get an easy payday off a single dad, who therefore must of course be desperate for female attention. Yes, that single dad was me.

Many people have heard of the “Nigerian 419” scams, those emails you get where someone in a foreign country promises you a significant share of a large sum of money, which the fraudster requires a small up-front payment to obtain. Often they pose as a child of ousted royalty, or the benefactor of an inherence. Those emails have been going around since email was invented, and existed before the internet was around through traditional mail.

Sometime ago I came across an entertaining website called 419eater, which documents stories of people scamming the scammers, making up absurd stories, getting them to send objects, write notes, and jump through hoops to waste the scammers time.

from Urban Dictionary “A catfish is someone who pretends to be someone they’re not using Facebook or other social media to create false identities, particularly to pursue deceptive online romances.”

And that’s where our story begins, a tale of a Catfish/419 scam.

I have blocked the name and face used by the scammer in case it is someone’s real identity. I Googled for details and wasn’t able to find the name used in other places so I assume it’s a fake.

A few days ago I received this surprising message. 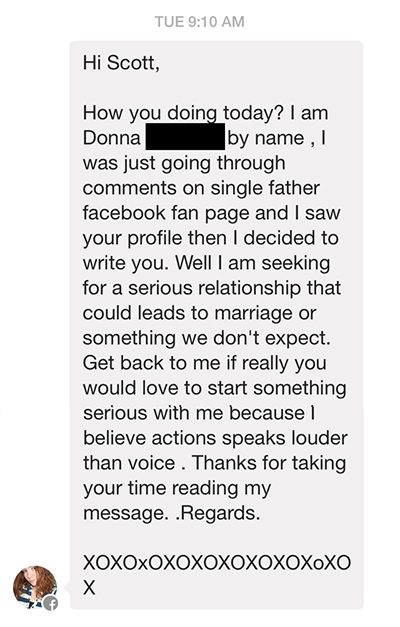 When I checked her Facebook page I saw a small number of friends, and that she lived in Florida. Ok, kind of strange. 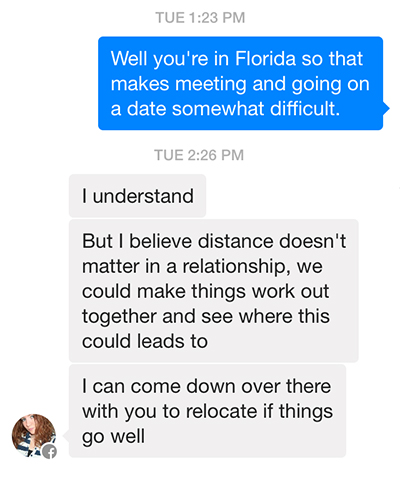 At this point I already know I am being catfished; the offer to relocate to another country after one message is a sure sign of it. I’m still not sure if this is really the lady or not, could be a money scam or someone just having some fun with me, so I decided to see what I could get away with.

At this point I already know that this isn’t really the lady she says she is, using that “scan my passport” is a common tactic of the 419ers to try and “prove” their identity. Well I have a better way for someone to prove their identity, and if they don’t do it I know for certain that they are scammers. I searched Facebook for her name and found 3 identical names with profiles that had the same photos and details.

So I proposed my sure-fire way to expose a faker. Remember this kids, it is so simple, yet effective. No passport photo needed.

That’s all it takes. A photo of them holding a paper with a custom note written on it, with their face visible, in a few minutes after you ask for it. That would have been pretty solid proof that this person is the Caucasian, redhead female she purports to be. I’ve done with before where it’s taken an hour to get the photo and it was so badly photoshopped that it was laughable. The eye can spot a fake.

That’s it. When excuses are made as to why they can’t pass my little test then I have confirmation they are fake. Now I suspect that this will be a money scam because if it was a romantic scam she would have wanted to confirm at least her physical identity. Now I know it’s just a matter of time before a wire transfer of money will be requested, I’m just not sure how the request will come. Now it’s time to have some fun.

She said she had a scanner, so lets get some stuff scanned shall we? The point of doing this is to waste their time that they could be spending scamming other people who may fall for this stuff.

And she was kind enough to write and scan my requested note.

Keep in mind that at this point I am just making up details about my life, if I’m going to engage in this process I’m going to have some fun with it.

It’s true that I’m not religious, but since she says she is I thought, OK, let’s see how far her religious sensibilities play down the line.

Now I know that the money grab will have something to do with a problem with her ticket to get here.

She knows how to use Wikipedia.

At this point she talks about all of the many countries she’s been to while working in the fashion industry, all the while not having a smart phone that can take pictures mind you. I’m going to jump ahead into our conversation to the more relevant portions.

Let me note, my wife and I were not swingers, nor did she die. I want to see how far I can push it before the scammer realizes that I am onto his/her game. When I’ve done this before they often realize that I am onto them and end the conversation when they see they are wasting their time, but not this one.

Fashion consultant that gets $45,000 per 11 month gig, had been doing it for 6 years, travels all over the world doing it but doesn’t have a website or a phone with a camera… I’m skeptical.

I understand that you are a scammer a I’m going to provide a public service by wasting your time and documenting your actions.

I didn’t bother to see if those were legit flight numbers, I assume an itinerary could be generated from a travel website.

And now another compliance test…

Click to enlarge. Funny, that sure looks like a photo taken with a camera phone flash, rather than a scanner. 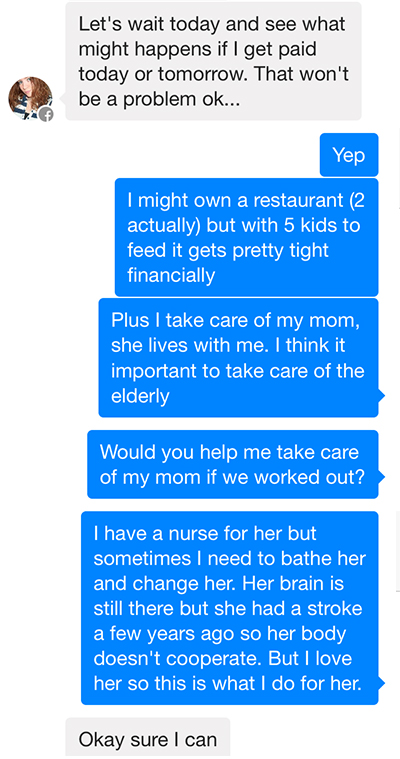 If my mom reads this, sorry, I’ll take care of you if this ever happens 🙂

Some BS photoshoped cheque. I didn’t get a screen grab but the issuer was “British Modelling Company”.

They are all offline now. Goodbye Donna.